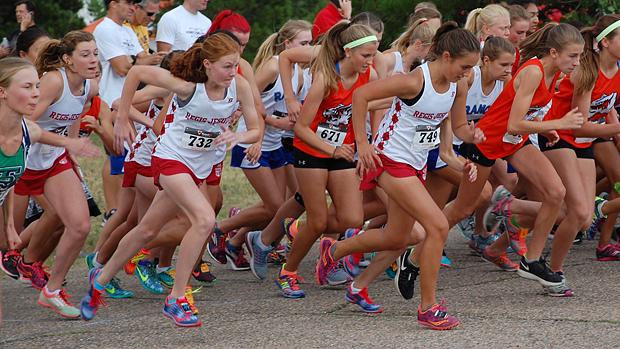 Regis Jesuit got their season off to a most auspicious beginning. Photo by Paul Davidson.

You could be forgiven if you didn't believe it after the Cherry Creek Invitational. But, if you don't believe now after the Ponderosa Mustang Stampede, you're just being stubborn.

It would appear that the Regis Jesuit girls are the new kid on the block of the 5A elite teams.

The contrast from last year could scarcely be more dramatic. The Raiders ended last season with a 21st place finish at state. The top finisher from that team at state finished in 59th position. For most folks, that's not the foundation of lofty dreams.

All that started to change on August 26. A team clad in white singlets and red shorts roade a 4-12-13-15-35 finish to an upset of such cross country notables as Cherry Creek, ThunderRidge, and Fort Collins. And, there really wasn't anyone who kept it close with Regis Jesuit. The Raiders' 76 points easily outdistanced the 107 posted by second-place Highlands Ranch.

A big part of the equation, though certainly not the only part of the equation, was two freshmen in Regis Jesuit's top three. Isalina Colsman took fourth in 19:15. Clare Davidson took 14th in 20:25. And, perhaps to serve as a reminder that upperclassmen still count for a lot in this program, Sydney Lindquist split them up in 12th at 20:22. Veterans Julia Vitella and Kelly Grubaugh rounded out the scoring five. 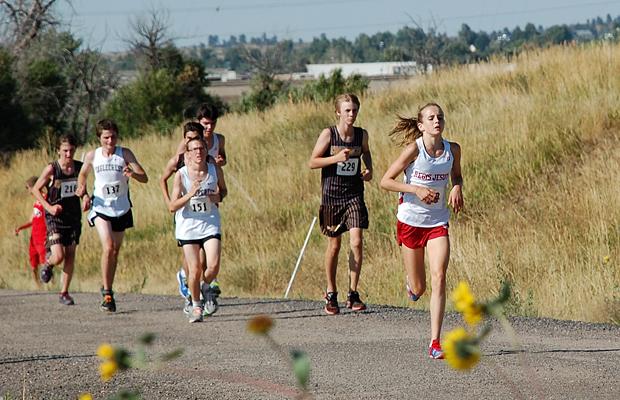 Only a freshman, Isalina Colsman has made a habit or running in front of folks, to include boys with the misfortune of starting a race four minutes in front of her. Photo by Paul Davidson.

That 20:22 time for Lindquist is a mark she has bettered only once in Colorado--at Liberty Bell during her freshman year, and that by only five seconds. So, Lindquist opened the season at what is arguably the high-water mark for her high school career. That kind of early good news can rewrite the script of an entire season.

The story line was harder to read at Ponderosa due to the format of the meet, but a combined scoring of the FR/SO and JR/SR races had RJ well out ahead of all other teams, indicating that the strength of this team is nicely spread out through the classes.

Recognizing that early success, the coaches who vote every other week to rank Colorado's top teams put Regis Jesuit at #9 in the 5A poll. It's been ages since Regis Jesuit has taken in the view from that kind of perch.

And, all of that raises the question of, "What happened to bring about this kind of a change in the program?"

Well, a number of things happened--of that we can be certain. Isolating all the components can be tricky, but one thing that definitely happened was a solid incoming freshman class. In addition to Colsman and Davidson, Elizabeth Somer has also stepped up to the occasion and run well as a freshman.

It's also worth noting that the RJ girls program recently underwent a coaching change. Andrew Drysdale is now tugging at the reins of the program and yelling encouragement from the side of the course. 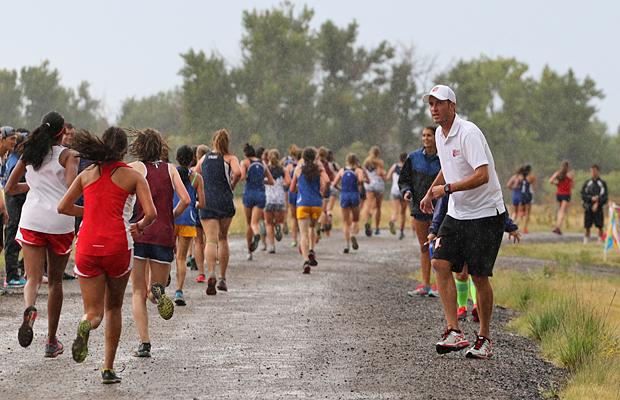 RJ's rise among the ranks of 5A comes as no surprise to Salida coach Kenny Wilcox. Wilcox had graduated from Wartburg and was an assistant coach in the program when Drysdale came in as a freshman in 2001. So, the two knew each other long before Drysdale signed a contract to coach at Regis Jesuit. I asked Wilcox about the recent Regis Jesuit run of success, and he told me:

Regis may be a "surprise" team this fall, but it is no surprise to me. Sure, Andrew knows how to put together workouts and how to develop his athletes like many other coaches. What Andrew does have, however, that is more unique and more powerful than knowing how to run a great workout is that he truly cares for his athletes. The young people he coaches pick up on that and in turn want to run hard for him, their teammates, and Regis. While Andrew could easily talk running all day long, he is also quick with a joke and is great at keeping things in their proper place and perspective.

Those are words of high praise from someone else who knows a thing or two about finding and motivating athletes who can.

All things considered, it would probably be unwise to imagine that the RJ girls have hit their ceiling at #9.
Tweets by ColoradoTrackXC