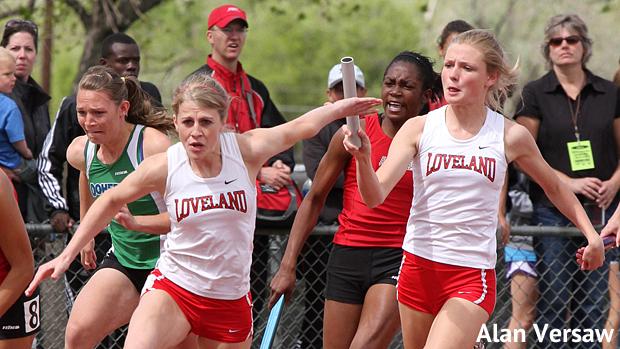 Loveland's Blonde Bombers were responsible for a state title or two won on the basis of sprint relays.

Think of this article as a follow-on to my piece a couple days ago about going to the CHSAA Track and Field committee with a proposal to partly redo the way we do relays.

Bobby Tillman (Pueblo West, formerly of Sand Creek) asked in a comment about whether scoring was coming disproportionately from sprint events.

All that resulted in the table you see below:

If you're like me, one of your first observations was, "Well, evidently there is more than one road that leads to Rome."

Not every girls state title in recent years has been won on the back of sprinters, not even close.

Three of the last four 1A state titles have had comparatively little to do with sprinters. In 2012, the Lyons 2A title and the Thompson Valley 4A title had very little to do with sprinting. Niwot managed 4A state titles in 2013 and 2014 with no points from individual sprint events, though the Cougars did cobble together a few pretty nice sprint relays those years. Eaton's last two 3A state titles have had sprint contributions, but they were really much more about other events.

And, it's a dangerous question to ask, "How much is too much?" It's a far better policy to begin by salute the efforts of coaches who craft winning teams with the resources available and an eye toward using the resources in the opportunities that present themselves.

For now, at least, I leave the reader to make up his or her own mind on that question. Personally, I need more time to think about what the data above actually tell us with respect to winning state titles.**

* - Courtney Mills was actually not primarily a sprinter but she did sprint and did earn a decisive share of Berthoud's 2011 state meet total.

** - That said, there are vastly more slots for girls sprinters in Colorado high school track meets than for other event disciplines. On that basis alone, I think you can make the case for trimming a sprint relay, but that is not precisely the main question to be answered by looking at the above data.