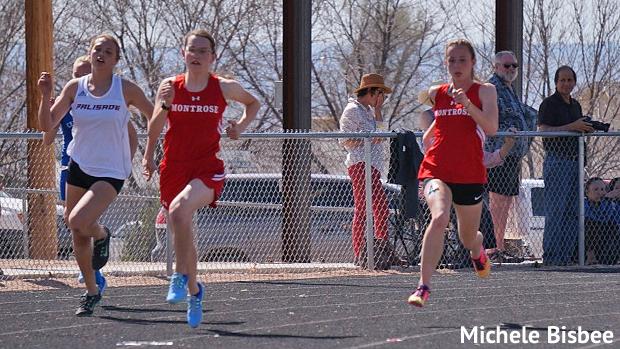 Madisyn Minerich and Abigail Renfrow might have been guilty of burning the competition a little on Saturday.

On a beautiful mid-March day that saw the temperature rise to the low 80's, twelve Western Slope schools converged onto the track facilities located on Garnet Mesa.  None was more prepared for the task than Montrose High School.

Madisyn Minerich and Abigail Renfrow contributed 36 individual points with 1-2 placements in both the 200 and 400 races and then teamed up with Katie Casebier and freshman Kelsey Rycenga to bring home the 4x200 and 4x400 relay titles.

That wasn't the end of the title crowns for the Lady Indians.  Sophomore Madeline Chandler brought home the 3200 crown and contributed to a 4x800 relay title.  Fellow sophs Abbey Heide and Alexa Yanosky cleared 5-0 and 4-10 respectively to add another 1-2 sweep in the high jump.  Little rust was evident for these ladies as Heide scored a PR and Yanosky matched her previous best.  Heide contributed another 8 points with a second-place triple jump 29-8.25 (0.0) that was within a few inches of her previous best.

These performances and others helped Montrose amass 173 points to outscore their nearest rival by 83.5 points.

On the boys side things were much closer.  The Indians held off the strong, late meet surge of Cederedge to squeak by 151 to 140.  Caleb Egbert (400), Evan Graff (800), Tylan Booth (300H) and the 4x800 relay took home first place medals.  These wins, accompanied by strong depth placing in most all events, kept Cedaredge at bay.