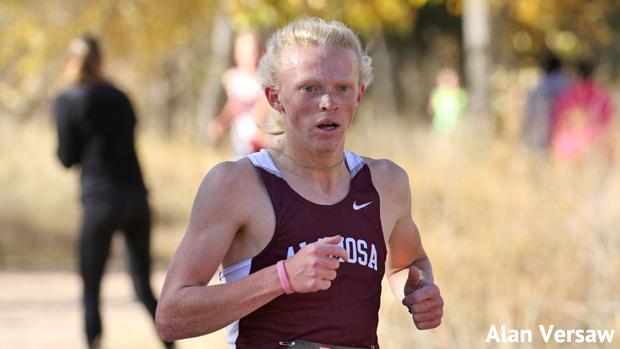 Caleb Berlinger has been a key piece of an Alamosa team that has won three consecutive 3A cross country crowns.

West Texas A&M. How does a young man from Alamosa get a connection with West Texas A&M, and what made it the choice for you?

At the beginning of my senior year, I had no plans or ideas for college, but I knew I wanted to leave the state. For a while I looked at Hastings, Nebraska, but the tuition was pretty high. Then I learned of West Texas A&M after they sent me an email for academics. I went on a college tour and got in contact with the cross country coach there. After seeing the facilities and meeting the coach, I decided that West Texas was the place for me.

What do you plan to study at West Texas?

Again at the beginning of the year I had no clue what I was going to college for, but I enrolled in the athletic training class that is new to Alamosa High School. After experiencing the program and what athletic training was about, I quickly decided that I wanted to become an Athletic Trainer.

How and when did you decide to put the investment in to become a distance runner?

Up until high school, I had no clue that distance running was a sport. My interest in it started during the summer before my sophomore year. I began to train with my team and realized that a sport where I was competing with myself and others was extremely fun and challenging. I realized that the work put in yielded results, so I began to work more and more. The payoff felt great, so I decided to stick with it, and look where I am now.

It was pretty clear you and your teammates put a lot of prep work into last fall's cross country season. Tell us a little about what the training was like over the summer.

Summer training is probably the hardest and most fun for me as a distance runner. It consisted of 6AM practices, weekly team breakfasts and lots of tempo runs. Towards the end of the summer, we were hitting 65-70 mile weeks.

If you had to narrow it down to one favorite moment from your high school career, what would that moment be?

One of the more memorable moments that has stayed with me over the years was my freshman year during the Eric Wolff invitational. My race plan was to feel out the first mile and PR. At the time I was on JV and our varsity squad was not running, so I knew It was going to be a slower race. At the first mile, I end up in the top 5. Soon enough I was sitting in the lead runners pocket. My coach told me to just stay there, but the pace felt slow, so I took the lead. Coming around one of the last turns, I see my head coach sitting in a golf cart, he does a double take when he sees me in the lead and yells, "Ber, What are you doing?", I yelled back jumping mid- stride, "I'm winning coach!"

You have three weeks left in your high school career. What's left as a priority for you to accomplish in that time?

The main priority is to get my head straight, I have been training with 8 guys for the past four years of my life. Its gonna take a lot to walk away from them. Second I have to focus on track. I still could set some big PRs, get some scholarship money, and place at state. Last, I want to make peace with high school and everything good and bad in it.