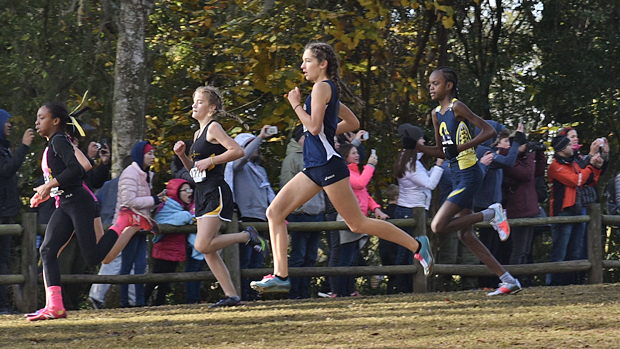 Brooke Wilson trades strides with the other leaders early in the 11-12 Girls 3000 meters.

Disclaimer: This article would have shown up a whole lot sooner, except that I needed help getting pointed to the results for this meet.

Like most of the rest of the nation, Colorado see too much athlete investment in the 15-18 races at USATF National Junior Olympic cross country. We'll get to the Colorado athletes who did run in those races in a moment here, but we'll focus first on where Colorado's biggest successes fell--in the races aimed at middle school aged athletes.

This year's Colorado national champion is Erik Le Roux. Le Roux simply ran away from the field in 13-14 Boys, just as he has run away from every other field he has faced this fall. Le Roux finished the 4000 meters in 12:16.4. That was a comfortable 11 seconds ahead of second place.

Nathan Pontious was the next Colorado finisher in that race at 13:24.6.

In 13-14 Girls, Riley Stewart and Cadence Lapp took top Colorado honors in 13th and 14th at 14:166 and 14:19.3. Two prominent Colorado names, Isabella Prosceno and Aidyn Woodall, were just behind Lapp in 15th and 16th. Word I've received, though, indicates neither Prosceno nor Woodall were running at 100% on Saturday, so their results might be taken with a grain of salt.

In 11-12 Boys, Jackson Parrill posted a 9th-place finish at 9:57.5 for 3000 meters. Brennan Draper finished three seconds and five places back of Parrill.

Brooke Wilson very nearly landed a national title in 11-12 girls but lost out in a sprint to the finish with Lauren Ping (you might recognize that surname). Wilson's 10:48 ended up two seconds back of Ping at the end.

Colorado stormed the top ten in that race with McKenna Mazeski taking fourth, Bethany Michalak taking fifth, and Suvina Heidt in ninth. The Parker Panther girls added insult to injury on the entire field by taking a dominating team title, scoring 33 points to 116 for second. Overall, 11-12 Girls times were a bit inflated by an inadvertent detour that added close to a minute to the times.

Jodzuel Juarez of Ellicott Middle School, who finished second at the Colorado Middle School State Cross Country Championships, mixed it up with a field of almost entirely high schoolers in the 15-18 Boys championship race. Jodzuel finished 116th with a time of 17:24. He figures to be ready for prime time next fall, and this was test enough to demonstrate his abilities.

Leah Christians was the top Colorado finisher in 15-18 Girls. Christians took 23rd with a time of 19:52.