But running a little fast has always been the theme for the Cherry Creek senior, who heads to this year's state championships as Colorado's undisputed Queen of the Distance events, AKA the Reigning Champion in three events, AKA the state record holder, AKA the best ever to do it.

"That was a little fast," Riley Stewart said between breaths.

The Cherry Creek senior continued to walk the curve on the top of the track while coach Steve Lohman jotted down her 45-second 300 meter split.

Her arms swayed as she walked beneath the scoreboard that loomed high above the south end of the track. In large bold letters it read: "STUTLER BOWL" on top, and "Dedicated To Excellence" in italics below.

Meanwhile, just under a dozen of her teammates were sucking air behind her as they moved from a walk to jog.

On the day's agenda was a ladder consisting of three sets of 300-200-100 with recovery at half the distance, and a quarter jog after each set. While the workout seemed simple enough, it was designed to set the lungs on fire and get any cobwebs that may exist cleared out for this week's 2022 Colorado State Track & Field Championships.

The goal pace was set just below each athlete's 800m personal best. For Stewart, that meant her 300m should've been right around 46-47-second range.

She jogged around the track as her teammates caught up. They traded jokes and kept the mood light, despite their hearts humming at high levels.

Back on the line for the first 200m, she tore off around the top of the track. Her large, powerful stride ate up precious real estate while her blonde ponytail drifted in her wake like a sizzling fire. Within a few strides, she was running without a negotiable shadow, per the usual.

She backed up that fast first 300m with a comparable debut 200m: A 31-second clocking.

For the past three years, the Cherry Creek senior hasn't been beaten by a Colorado runner. She has dominated the scene outright since 2019.

But running a little fast has always been the theme for the Cherry Creek senior, who heads to this year's state championships as Colorado's undisputed Queen of the Distance events, AKA the Reigning Champion in three events, AKA the state record holder, AKA the best ever to do it.

And consider this: Her state title undoubtedly would be higher if you include the canceled 2020 season.

It wouldn't be much of an argument to claim that Stewart is Colorado's best distance runner ever. And that says a lot coming from a state that produced (recent) stars like Katie Rainsberger and Brie Oakley, both of whom had their state records fall to Stewart in the past year-and-a-half.

As the saying goes, records are meant to be broken, but perhaps it's fitting that Stewart's workout went a little fast -- there's only one way to break records, and that's to run into uncharted territories.

That's something Stewart is all-to familiar with.

For the past three years, the Cherry Creek senior hasn't been beaten by a Colorado runner. She has dominated the scene outright since 2019.

A CAREER ALWAYS ON THE RISE

As a freshman, Stewart finished fifth at the 2018 Colorado State Cross Country Championships and ran a Colorado personal best of 18:13 at the Dave Sanders Invitational. She qualified for Foot Locker Nationals and Nike Cross Nationals and went on to finish 21st and 37th, respectively.

And then she really got going.

Stewart won her first state title at the 2019 Colorado State Cross Country Championships as a sophomore. She ran a PR of 17:05 at the Cherry Creek Steve Lohman Invitational and later went on to qualify once again for Foot Locker National Championship and Team Cross Country Nationals, where she finished 17th and 31st.

While COVID-19 derailed any attempt at claiming state titles on the track, Stewart only got stronger.

And as impressive as her first two few years of high school were, she went on to defy the common theme of hitting any semblance of a plateau.

"A lot of runners in the past who start off really well in their freshman and sophomore year, as the pressure built on them, they start to collapse in key moments," Coach Steve Lohman explained. "Riley seems to just relish it. She looks forward to it. She loves it when there's good competition."

True to form, Stewart defended her state title in the seven-week cross country season at the 2020 Colorado State Cross Country Championships in 17:33 and ran a PR of 17:02 at the Colorado Classic XC Meet.

Despite Foot Locker and NXN being canceled in 2020, she went on to finish second at the XC Town USA Meet of Champions Presented by the Garrett Companies and then was third at the AAU National Cross Country Championships.

While by that point her career was already one that most athletes dreamed of, her 2021 campaign was when she ran herself into the conversation of "Best Ever." She also ran 10:31 in the 3,200m at the Colorado State meet. A week later, she ran a 4:40.66 full mile to finish second at the invitation-only Brooks PR meet in Seattle, Washington.

When the dust had settled on her junior year, she owned one state record and five state titles. And yet, Stewart wasn't done. In her final cross country season as a high school athlete she tore through every course she set foot on.

"Every time I get on the track it's an opportunity to run fast and improve myself," Stewart explained. "I'm just motivated by my teammates."

Stewart picked up her third consecutive cross country state title at the 2021 5A Colorado State Cross Country Championships, running 17:20. Several weeks earlier, she ran a Colorado PR of 16:56 at the Pat Amato Classic.

"A lot of runners in the past who start off really well in their freshman and sophomore year, as the pressure built on them, they start to collapse in key moments. Riley seems to just relish it. She looks forward to it. She loves it when there's good competition."

In 2021, as Foot Locker rebranded as the Eastbay Cross Country Championships, Stewart qualified for the third time in three tries and finished fifth.

But her best performance to date on a cross country course came at the Garmin RunningLane Cross Country Championships in November as she ran a PR of 16:28 to finish third.

Stewart's time was the second-fastest ever by a Colorado runner behind Katie Rainsberger's 16:23 from the 2015 Desert Twilight XC Festival.

In the process of Stewart's very consistent and clockwork-like rise, she's brought quite a few teammates up with her.

"It's tough for kids sometimes to see how good they are when they're comparing themselves to Riley," Lohman explained. "But on the other hand, she sets the bar. So all the other kids see what they need to do do be good."

Cherry Creek currently has three runners inside the top seven in the CHSA Class 5A 3,200m this season, including Shelby Balding and Addison Price. Stewart, Balding, Price, and Addison Laughlin are also in the top 10 in the 1,600m.

Additionally they own the top two times in the classification in the 800m, with Kinsey Christianson a second behind Stewart.

"Having these girls to train with and keep each other going is an amazing thing to have," Stewart shared.

While the bond Stewart shares with her own team is strong, it spreads much further than that -- while in-season she lines up on the starting line in her royal blue Cherry Creek high school singlet, she's friends with many of her competitors who wear opposing school singlets.

"The Colorado running community is unlike anything else," she explained. "I'm best friends with a lot of the girls I race. And I train with Bethany a lot."

The camaraderie shared even after the race or season's ends has clearly had its affect on the Colorado running scene -- some of the best performances in history have come out of recent years.

Stewart's presence on the track and on the course has elevated the perception of what is great, and more importantly, what is possible.

"I always knew when she was younger that she was talented, but then she just kept getting better and better, to the point that there wasn't anyone who could beat her anymore," Lohman shared. "Riley is just in a different class."

Along with all of her state titles and records, another impressive feat is her record in Colorado: She hasn't lost to a Colorado runner since May 18, 2019, when she finished third in the CHSA Class 5A 1,600m in 5:00.

You might mark that as the day Stewart's reign began.

With her state title tally now at six, she heads to this week's Colorado State Track & Field Championships with the opportunity to cap her illustrious career with three more individual titles.

ONE MORE TIME AT JEFFCO "It's obviously bittersweet," Stewart explained of her final state meet. "Jeffco is just an amazing stadium. The state meet has such an amazing atmosphere. To end my career there is exciting."

"Three days of racing is pretty difficult," she shared with a laugh. However, the Cherry Creek senior says she's determined to score as many points as she can for her team, which is eyeing up a team state title.

For Stewart, Saturday's 1,600m holds a bit more weight than other events, as it's not only her final individual event, but it's where she first felt at home.

"To win that event, my signature event, would be special," she explained. "I feel like my career started with it."

While her plate appears full, Stewart says she's up for the challenge.

"Every race is a new opportunity," she shared.

She's got three more times on the line to run a little fast.

"To win that event, my signature event, would be special," she explained. "I feel like my career started with it." 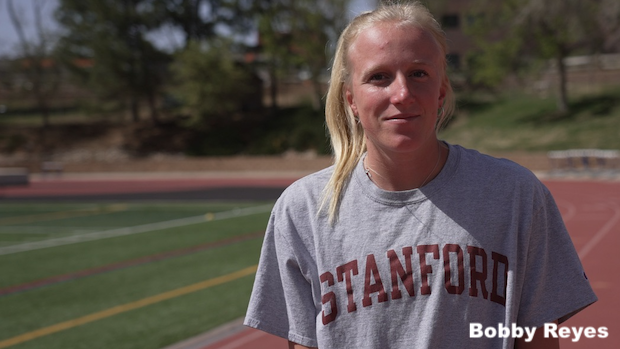