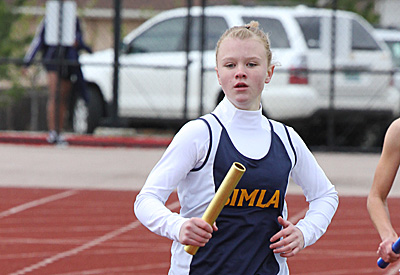 A nearly full set of competitive relays means that Simla will be heard from this week in 1A girls track and field. Photo by Alan Versaw.

One big advantage of waiting until now to do the 1A state preview article is that now I have the full advantage of writing this with the heat sheets in front of me.That eliminates a good bit of the guesswork.

Roughly three months ago, it looked like this contest would come down to a battle between Merino, Otis, and Fleming. But that contest dissolved before it ever got going. Ashley Atkin remains the only female member of the Fleming track team, so their possible point total is effectively capped at 40. The top sprinter for Otis found another sport for the spring, leaving them with what is still a decent team, but not one that figures to make a run at a state title. Merino, on the other hand, has blossomed into everything that was expected of them, and possibly a little bit more.

The key to success in 1A track and field is numbers. Given the size of the schools, every team is going to struggle with numbers to a degree. But, having a team of at least 15 - 20 individuals opens up a lot of possibilities. Merino has that kind of team.

The Rams (if that's not a misnomer where a girls' team is concerned) occupy several of the classification's highest seeds--Anna Kindvall is a #2 seed in the 800 and a #3 seed in the discus. Larissa Conger owns the top seed in the long jump. Merino boasts a #3 seed in the 4x200 and SMR8, a #1 seed in the 4x400, and a #1 seed in the 4x800. For anyone doing calculations at home, that's a lot of high seeds. It's questionable whether Merino has the bodies to run all of those relays at that level at the state meet, but they do figure to come home with a big pile of relay points. Elsewhere, Malia Michel has the #3 seed in the pole vault.

From this distance, and with my deteriorating vision, that makes Merino look like a very tough team to beat.

It would appear that Simla has the most reasonable chance of making a run at Merino. Like Merino, Simla is bringing some nicely ranked relays to state. Like Merino, there are questions concerning which of these relays they'll actually be able to run at the same level at which they qualifiied the relays for state. But, the relays Simla brings to state are the 4x100 (seeded #1), 4x200 (#2), 4x400 (#7), 4x800 (#3), and SMR8 (#5). If the Cubs can hold ground on these relays, a state title run seems possible. Keys for Simla in individual events are the 1-2 tandem of Jessica George and Kristen Wilson in the triple jump, Kenzi Mitchell (#3 seed in the high jump), and Tanna Boyle (#2 seed in the 3200). Jessica George also owns a #2 seed in the 100.

Other top teams in the classification include Bethune, Springfield, Elbert, and Dove Creek. Each of these teams, however, is beset with the numbers problem. All figure to score pretty well at state. Each team has a top athlete or two. But each team also simply seems to lack the sheer number of highly ranked qualifers to make a serious run without a little bit of help from either of the above teams having a breakdown or two. If, however, most of the Merino and Simla relays turn out to be more bluff than substance, it's conceivable these four teams could be in the thick of things without some sort of breakdown from Merino and Simla. But it seems unlikely that there'd be that much bluff and that little substance.

As we stare down the future of 1A track and field, distance appears to be the great untapped category of points open to a team willing to seize that opportunity. In a classification almost devoid of cross country programs, distance running may be the soft spot open to exploitation. For this year, Bethune's Melanie Burton may win both the 1600 and 3200 (although Birdie Hutton will present a considerable obstacle in the 1600, and possibly the 3200 as well if she is just now starting to return to form from an injury in the fall). Going solely by seed times, Burton just might win the 3200 by the better part of a full lap. That would suggest there are a lot of points ripe to be picked in that event in future years.

Interestingly, one of the classification's top distance talents, Jodi States of Wiley, will also be running the 100. States and Hutton, incidentally, both run cross country in the fall. To my knowledge, only one other 1600/3200 entry from 1A has the advantage of running cross in the fall. The problem with 1A distance is that--for most people--it just stinks to run a lot of solo mileage day in and day out. For teams that can get some synergy going among two or more distance athletes training together, there exists an open door of many beckoning points. Something like the bounty of pole vault points for the few schools that choose to participate in that event.

For the boys, the great and final showdown between Springfield and Walsh looms. If the wind isn't blowing, you can almost shout from Springfield to Walsh, but they get to settle this in Denver.

Springfield won last week at the league meet, but there is a name on the Walsh set of entries that did not appear in last week's league meet. That name would be Laken Alley, and he happens to own the classification's top seeds in the 100 and 400. Pencil him in on relays. If Alley's absence in recent weeks owes to injury, he may not be able to return to the levels reflected by the seeds, but even his presence tilts the table a little. Of course, it's not as if Walsh needs a lot of help. Walsh figures to get a bundle of points from Landry Cogburn in the 110H, 300H, and 200. Also producing some points should be Weston (3200, TJ) and Jaxon (1600, 3200, HJ) Meardon, plus Terrell Stafford in the long and triple jump. The relays for Walsh may have difficulty running to qualification standards in every case, but there's bound to be a stinger or two of a relay in the mix.

Springfield counters with a very good sprint group of Bric Koehn, Anthony Kinslow, and Dillon Rose. Bo Hutches runs a very competitive 1A 800 and 300H. A few other pieces fit in with lower seeds, but these are the biggest guns for the Longhorns. And the relays are probably even better, on the whole, than Walsh's relays.

Advantage Walsh, but maybe not by much--especially if Alley is not completely healthy.

Other schools, frankly, are a long way back from these two. Pikes Peak Christian, Bethune, Sierra Grande, and Idalia will collect their share of points, but will be doing well to accumulate half the point total of either Walsh or Springfield.

Whatever you care to make of the reasons and explanations, small school track and field in Colorado is the domain of a handful of eastern plains schools. It's been that way for a long time, really. And these schools have tenaciously held their ground even as enrollments have dwindled.