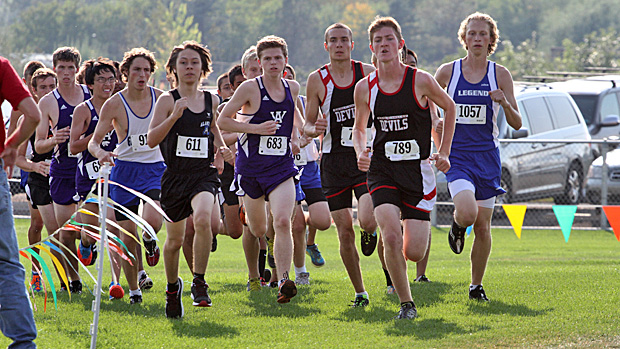 The north Denver metro region is rich in cross country history. Although many of the schools in the region--not all, however--have struggled with cross country in recent years, the history of the region tells a very different story.

From this list, Denver East (5, dating back to the 50s and 60s), Arvada West (1), Northglenn (3), and Rangeview (1) have won team state titles. The list of individual titles gets lengthy here as you go back through history but includes folks like Troy Hernandez (Brighton), Ashi Geberkidane (Denver East), Jenny Stricker (Pomona), Kevin Herd (Rangeview), Mark Tower (Arvada West), and Bradley Harkrader (Thornton) as you confine your search to the years since the race distance went to three miles in 1977.

Several of these teams have boasted some considerable individual talent in recent years, but the best emerging teams at the moment would appear to be the Thornton and Pomona boys. Each year, the Trojans and Panthers seem to creep a little closer to the 5A ceiling.

Here, you are delving into some serious cross country history. Before we get to that, however, we'll list the teams and probably prompt a few memories along the way as team names are read: Arvada, Green Mountain, Golden, Wheat Ridge, Broomfield, Denver North, Denver West, Vista Peak, and Skyview. While the list isn't long, it does contain a lot of cross country history.

Team state championships trace back to Green Mountain (5), Golden (2), Denver West (2), and Wheat Ridge (4). Most of those titles were won in what was the state's largest classification at the time, but as demographics have changed, these schools have moved to what is now 4A, the state's second-largest classification. Recent state individual title winners from this group of schools include Steven Weeks (Arvada), Joseph Manilafasha (Denver North), and Scott Fauble (Wheat Ridge). Denver West came very close to having an individual state titleist in their back-to-back wins in 2002 and 2003, but wasn't quite able to pull it off. If you go back to the 70s, 80s, and 90s, Wheat Ridge and Green Mountain had an impressive list of individual state title winners that includes some familiar names (some of whom still have a finger or two in Colorado high school cross country) like Jon Hume, Rebekah McDowell, Sam Reese, and Toby Cruse.

Vista Peak, of course, is the new kid on this block and is still very much in the mode of building cross country history.

Until Holy Family's girls team title last year, there were no team titles for currently existing teams from this region, though there have been a few near misses. Faith Christian has had some considerable success in cross country, but no team titles. Brittany Thompson did, however, have two individual firsts and two seconds from 1998-2001, and Evan Fortney added another individual title in 2011.

The Academy, Arrupe Jesuit, Bishop Machebeuf, Denver School of Science & Technology, Jefferson Academy, Eagle Ridge Academy, Vista Ridge Academy (not yet a fully CHSAA-sanctioned school and may be 2A when they are), and The Pinnacle have cross country histories of varying duration (mostly short) and success. Probably most notable on this list is Jefferson Academy. Currently coached by one of the true characters in the Colorado high school coaching ranks, Ben Hershelman, it was earlier the place where current CSU head coach Art Siemers cut his coaching teeth in Colorado. Siemers made the climb from JA to Colorado School of Mines to CSU in meteoric fashion. I remember wondering in my earliest years of coaching how Jefferson Academy--a little charter school that at the time was mostly known for basketball--could be so good. In retrospect, I understand now.

In historical perspective, Denver Lutheran also owns one state cross country title (1975) and can be argued to belong to this group of schools. Denver Lutheran closed its doors a couple of years ago and, in some sense, was absorbed by Lutheran High School in Parker.

Here we have Denver Waldorf and Aurora West College Prep, two of the newest cross country programs in the state. Other than to say that their history in cross country is short, I'm at a loss for stories to tell about these programs. Perhaps the season ahead will bring some developments of note.

The density of meets is a little less here than in some other regions. Venues that are both available and suitable seem to be in shorter supply here than some regions. But there are nevertheless some noteworthy meets to be found here.

Northglenn hosts the Pat Amato Classic on the last week of invitationals each year. Last year, perfect conditions yielded some times that were nothing short of stunning. The meet is contested in the Northglenn Open Spaces Park and honors the coach who was at the helm for Northglenn's three state titles (plus several more outstanding teams). The consensus opinion seems to be that this one is the premiere meet of the region.

Denver North has been gradually building their meet in recent years. Unique in that it runs on a Monday, the Vikings use the Willis Case Golf Course to showcase their meet.

Brighton hosts the John Martinez Mercury Classic in early October. As you might have guessed, it honors a longtime former coach at the school. Brighton meets were once hosted at the Brighton Sports Complex not far from Barr Lake, but in my personal opinion the Adams County Fairgrounds course is a much more desirable place for a meet (the Brighton Sports Complex was one of the few places I ever promised myself that I would never ever return for a meet).

Arvada West  hosts their meet on the fourth Friday of the season at the Stegner Soccer Complex in Arvada. Though flat, the course is somewhat more appealing than your first hunches for a soccer complex might lead you to believe.

Like Brighton, Horizon goes to the Adams County Fairgrounds to host their meet. It appears the old 4K Popsicle race has become an historical artifact, and this one will be a real 5K.

Thornton hosts on the fifth Friday of the invitational season at the Thornton Recreation Center. Photos received from last year's meet suggest the course is mostly flat and alternates between grass and sidewalk, though I'm open to better descriptions. You can get a lot of faulty impressions from about five still images.

Mountain Range coach Chris Smith has the temerity to host his meet on the same date as Liberty Bell, but the idea seems to be catching on as the meet grows little by little. The meet location? That would be the Adams County Fairgrounds, of course.

There are doubtless other meets in the region, but they are flying under my personal radar for the time being, at least.