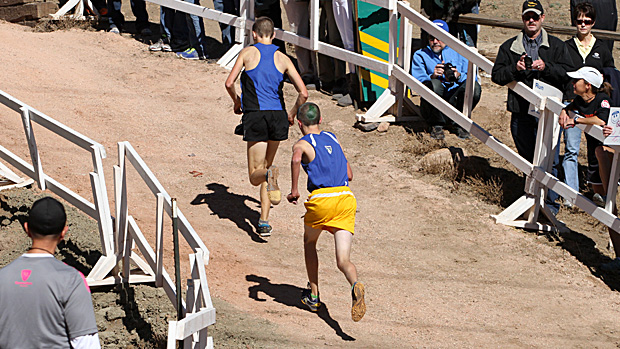 Joel Such fights off a bid from Ben Butler to seal the deal on Lyons' perfect score. Photo by Alan Versaw.

10. Juggernauts: The Mountain Vista boys, Salida girls, and the Lyons boys come in as teams that have completely dominated their classification rankings all season. Which one posts the largest margin of victory on Saturday? More puzzling yet, how do you measure the "largest margin of victory," since one team scores five, one scores four, and the other scores three? I'll figure a way to measure it and will have an answer for you on Sunday. For now, though, let's just note that none of these are done deals yet.

Fortunately, Lyons made this easy for me by perfect scoring the 2A boys race. Salida ran a strong second in the most-dominating category among these three.

9. Easing Gridlock: The first half-mile of the 4A races looked like the LA freeway at 5 PM last year. CHSAA took a closer look at the situation and decided to reduce the 4A fields from 30 teams to 24 teams. Will the difference be evident past the barns, through the creek crossing, and into the wooded portion of the course?

I wasn't at the creek crossing (too much humanity to deal with while a race is going on), but I'm told by multiple coaches who don't share my agoraphobic tendencies that there was some forced walking to be seen before all the runners got through. Undoubtedly, we saw an improvement over last year, though it was still pretty congested through the creek.

8. Is there a broom in the house: Is there any team that can sweep titles this year? Lyons? Air Academy? There don't seem to be a lot of possibilities on the table.
No sweeps. Lyons had a first and second. Frontier Academy had a first and a fourth. Those were as close as we got to sweeps.

7. Colter v. Gregory: Who wins between Jordyn Colter and Lauren Gregory? Colter dominated at the Cherry Creek Invitational, but two weeks later at Fort Collins, Gregory was perilously close to Colter at the finish. Gregory has been dominating everything in her sights ever since.

Jordyn Colter continues to be snakebit at Norris Penrose/El Pomar. She finished today, but nothing like her season would have indicated. Gregory not only beat Colter, but everyone else as well.

6. The Sudden Interest in 3A Boys: Lamar's boys looked to be dominating everything 3A until Frontier Academy lowered the boom on the their regional. Who takes the big prize on Saturday?

Frontier Academy was more convincing than the 11-point margin of victory would suggest.

5. Let Sleeping Dogs Lie: Monarch has been very measured and very quiet since Pat Patten. The Coyotes came into state a little lot beat up last year and still won. Does Monarch blow the lid off the thing this year? Or... do Cherry Creek and Fort Collins have something up their sleeves that they are waiting to spring at the big race?

Somebody awakened the Coyotes. And they dominated in every way imaginable. I was pretty sure I needed to use the "Monarch Deposed" headline when I had the opportunity.

4. The Lottery: Who survives the 10-team showdown in 4A girls? You can make a good case for a lot of teams in this one, but only one team can win.

This one goes to Thompson Valley. They ran exceptionally well while everyone else suffered little lapses here and there. It's tough to put together a race as nice as Thompson Valley's on a course that gives you as many opportunities to slip up as this one. Hats off to a great race by Matt Norton's crew.

3. The Big Mo: We saw stunning regional races from the Broomfield, Durango, and Air Academy boys last weekend. Can any of the three teams carry the momentum forward for a big win in 4A boys on Saturday?

Big Mo took up residence in Broomfield this week. Mo even went shopping and bought the Eagles new singlets for the occasion. Another round of hats off to Broomfield on account of one stirring piece of domination. But, if you saw Greg Weich's Smoky Hill teams, none of this comes as a big surprise. By my reckoning (which could be off), Greg Weich becomes the third Colorado coach to win state titles at two different schools, and two of them have come the last two years. And all of them have won at least one state title in the 4A ranks.

2. Cerake: I'm not sure whether or not this is Cerake Geberkidane's kind of course, but he certainly has the potential to hit one out of the ball park on Saturday. Can the dominating one go under 16:00 for the win? He ran 16:38 last year.

Yes, he can. Put this one in the books as a 15:48. And, this one takes my nomination as his most impressive run of the season. Sub-16 on this course as the temperatures were climbing well out of the range of ideal is a stellar performance.

1. Elise: Can Elise Cranny run under 18 minutes on this course? It's the consensus of opinion that Cranny wins with the best time of the day, but she won 4A in 18:41 last year. Nobody doubts Cranny is faster this year, but how much faster?

Seven seconds away. Had she been pushed, it may have been a different story. But, exactly who is going to push Elise Cranny?