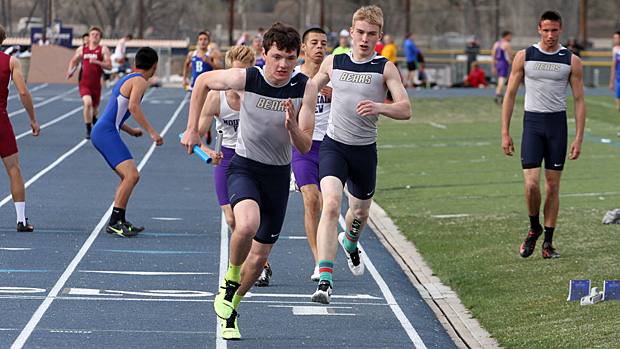 For those who haven't yet discovered, Palmer Ridge has developed some exceptional relays, and they will be putting a couple of those squads on display Friday night in Longmont. Colorado Track XC file photo.

Where high school track and field is concerned here in Colorado, it' doesn't get much better than the St. Vrain Invitational. The St. Vrain has it all--outstanding viewing options with convenient access to field events, highly efficient timing and scoring, a selection of top-tier bonus events, insightful announcing, and all the competition you could ever dream of in a single afternoon and evening. If you're looking for something better than this, it probably doesn't exist.

Elite Mile: Okay, so you came to watch high schoolers, and these are not high schoolers, but these guys are good. Last year, the fastest mile ever run in Colorado (4:03 and change) was run in this race. Former Colorado high school star Dey Dey (he was known as Dey Tuach in high school) is potentially in a position to threaten that mark this year.

Relays: The relays, and especially the sprint relays, promise to be exceptionally good on Friday night We'll start with the boys and move to the girls:

Boys 4x100 - Here you get Cherokee Trail and Valor Christian in the top heat. Both teams bring in 42.xx times on the season, but with a good push, both teams are serious threats to drop into the 41s

Boys 4x200 - Cherokee Trail again with an overlapping cast of characters, but this time the main competition comes from 4A Palmer Ridge, the new 4A powerhouse. CT has already run into the 1:27s, and that should be all the motivation Palmer Ridge needs to get there.

Boys 4x400 - What doesn't get settled in the 4x200 gets settled here. Once again, the key matchup is CT and Palmer Ridge. Both teams have run 3:22.xx this season, but don't be suprised if one or both teams drops it below 3:20. And keep half an eye out for 2A Lutheran. You can't miss the white speedsuits, and they just set the 2A all-time classification record last weekend at a little over 3:24

Girls 4x100 - It's two teams so fast that they're better known by the school initials than the school names--CT vs. GW. If handoffs are clean, we could be in the territory of a Colorado all-classification record when the dust settles on this one. No, I'm not kidding about that.

Girls 4x200 - The cast changes dramatically, but the quality little. CT is joined this time by Loveland and Valor Christian. All three teams come in with 1:43.xx times.

Girls 4x400 - Thompson Valley vs. Niwot vs. Fairview. All three teams have been well below 4-flat already this season. TV vs. Niwot should be a nice preview of the 4A state race. Fairview would love to beat them both.

Girls Discus - How many high school invitationals have you been to with three girls having legitimate shots at 150 feet? Haley Showalter has already been there. Keely Parish and Dailyn Johnson are knocking on the door. A little synergy, perhaps?

Boys Discus - Cody Bratten, Nick French, and Miles Rivera each come in with 160+ credentials, They are joined by another of the same kind out of Wyoming--Grayson Fleming. The markers will need to be hustling to spot these throws.

Let's just say that Kevin McClanahan is going to go home tired on Friday night. He takes on Andrew Bradberry in the 100, Brandon Singleton and Mar'Keith Bailey in the 200 (all three are under 21.8), and Singleton and Zane Vanderberg in the 400 (all three are under 48.9). Plus McClanahan will be spending some time at the long jump pit. Mr. McClanahan is about to learn the meaning of the phrase "tag teaming." If he comes out shining at the end of the evening, it will be one of the special evenings ever in Colorado high school track and field. For now, though, it looks like a huge load. McClanahan has essentially no margin in any of the sprint races.

The girls 100 sees a matchup of the great Mullen Invitational race between Shayna Yon and Dior Hall. Yon won that round, but Hall didn't get to where she is without a memory.

Dior Hall is not entered in the 100 hurdles for Friday evening. Before you get too disappointed about that, Ashley Miller is entered. I'm guessing Miller was more or less expecting a showdown with Hall, but it won't happen this week. However, I've known an ahtlete or two who, in this kind of situation, gets a little chafed and says, "Okay, if I'm not going to get any help, I'll get it done on my own." I'm guessing Miller might have a little of that streak in her. She's certainly run great 100 hurdle times without serious competition before. If she betters the current 13.39 standard, try not to act overly surprised.

Molly Klotz doesn't have a lot left to prove in the 300 hurdles, but a good race here would still help her name recognition. She gets to take on Wyoming's best in Heide Pfoor in the top heat of the 300 hurdles.

The feature heat of the boys 300 hurdles throws together four sub-40s, with another two or three guys with serious shots at breaking through 40 on Friday night. The middle lanes will be occupied by Isaiah Kaiser, Thomas Busath, Evan Malin, and Josh Schreiber. Last one to hit a hurdle loses.

Isaac Green has taken on just about everyone else in the state in an 800 and made a close finish of it, so why not Zac Petrie. The unfortunate thing is, however, that there may not be anyone Isaac Green's own size for him to take on. Mark this one down as probably the best freshman 800 season Colorado has ever seen.

The 1600 should get very competitive out front with a lot of 4:25 types in Marcel Such, Paul Roberts, Carson Hume, Josh Bethany, and Chay Weaver. Someone is going to come out of this as a 4:20 type.

The girls 1600 looks very good up front as well. Claire Green and Darby Gilfillan have to be viewed as the favorites, but Riley Cooney, Catherine Liggett, and Ali Deitsch each have the potential to make things uncomfortable for the favorites.

They put the pole vault on the center of the field for the St. Vrain, and with good reason. The boys will feature a 5A state preview with Harley Korte, Andrew Barlow, and Jordan Hatfield set to battle it out. But, none of them are the favorites. That status would belong to 4A Nick Meihaus.

Meihaus doubles as one of the high jump favorites, but he will need to get by guys like Gavin Lamp and John Freismuth.

The girls pole vault features two 12-footers in Heather Waite and Kimberly Peterson. Waite is riding a hot pole these days, though, and hasn't tasted defeat in several meets.

Kevin McClanahan must chase the likes of Landon Gonser and Brody Oliver in the long jump. We should be seeing 22+ foot jumps.

Back straight stands - this is a very underrated viewing angle at the Everly-Montgomery Field. It's very uncrowded on the east side, though it can get a little noisy if you're too close to the Niwot team tent. And, it's easy to make a trek from the east side stands to view the triple jump action at the east end of the field event enclosure.

Finish line area - large throngs of people congregate just outside the fence west of the finish line. If you're agoraphobic, this is not the place to be, but you can get wonderful close-up views of the finishes of races and sneak quick little trips out to the throws venue from here. Beware, however, you will most likely lose your place at the fence of if you leave. In that case, you need to wait like a vulture for someone else to find an urge to leave--whether that urge be a restroom break, a concessions break, or a field event sojourn.

Finish straight stands - you can see all the track action from these stands, but it isn't so easy to get to the field events from the west-side stands. If you go to the top of the south end of the west-side stands, however, you get a nice overlook of the throws. Chances are, though, there will be a team tent already occupying this space.

South turn fence - for seeing most of the race action, plus the high jump, and making very convenient quick trips to watch long jump and triple jump, there is no better place to station yourself than at the fence around the south turn of the track. And, better still, there's almost always room along this fence without compromising your personal space.

If you can't be there to watch:

Well, we have that covered for you. MileSplit is live streaming coverage of the 2014 St. Vrain Invitational.

Be there, or be watching.