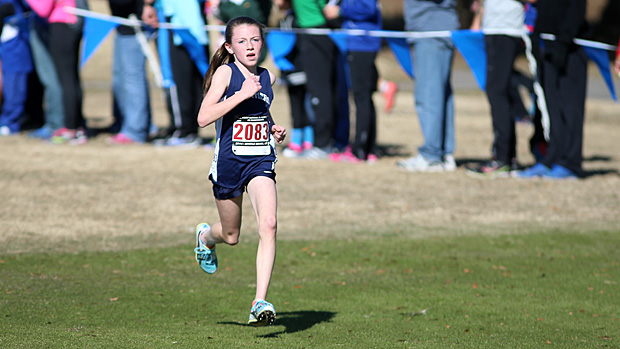 Aidyn Woodall became a national champion this weekend in the 11-12 age division. Photo by John Olson.

While most of Colorado's high school cross country runners had, with the notable exception of Lauren Gregory, closed out their seasons, the 14-and-unders who were willing to make a trip to South Carolina still had some things to settle. 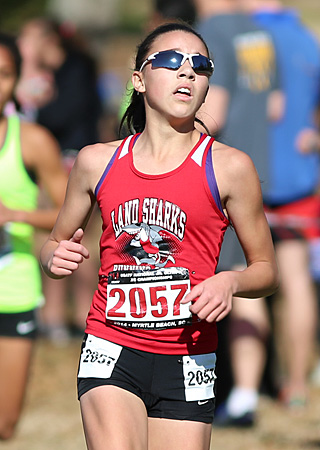 Several hours up the eastern seaboard, USA Club Cross Country Nationals were running in Bethlehem, Pennsylvania. Colorado's own Laura Thweatt won the women's 6K at 19:14. Not far behind her in 4th was Alisha Williams. Familiar local names in the men's top 20 included Tyler Pennel in eighth and Scott Dahlberg in 20th, giving the Colorado side of the race a distinctly Western State kind of feel.

And, as most of us know, Lauren Gregory ended up finishing 11th at Foot Locker Nationals on Saturday with a time of 18:04.

But there was track going on over the weekend as well--plenty of it, in fact.

It's pretty near impossible to detail all of the high-end collegiate performances over the past weekend, but we'll take a shot at identifying a few of those that loomed largest.

For the Air Force Academy, Dylan Bell and Joey Uhle both flew over 18 feet in the pole vault, marks that should advance both to indoor nationals. Grant Hamilton set a new Academy record with a shot put of over 59-5.5. That mark will probably not get him to nationals, but it may have a few more folks believing it's possible later on.

Meanwhile, Aaliyah Pete and Kiah Hicks of CSU posted big marks in the shot put and weight throw, respectively, Saturday at Steinhauer Field House in Golden. Pete's shot put of 53-10.25 currently has her at #2 in the nation. Pete will likely go to nationals with a bit of a competitive chip on her shoulder after the issue at outdoor nationals back in June. Jake Schneeberger also earned a nice spot high on the men's leaderboard of the weight throw.

It is very early in the season for multis, but's it's still worth noting that Justin Green and Josh Cogdill of CSU own the 1 and 3 spots currently in the DI men heptathlon rankings after Saturday's action.

Even after taking hits for altitude, Chaz Butler, Jurgen Themen, and Sunayna Wahi have Adams State well represented in the DII 60 meter rankings. 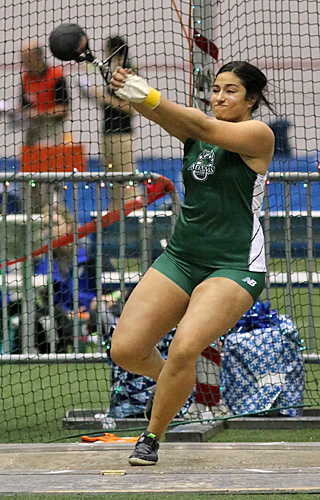 Patrick Weaver's 1:53 800 converted to a 1:50.04 and currently has the Mines sophomore ranked at the top of DII in the 800. Teammate Seun Ogunmodede long jumped 24-8.25 to the top of the pile of the DII long jump. Western's Bennie Kirkwood was over 7 feet Saturday at Mines and has his own #1 ranking in the high jump. Colorado Mesa's Whitney Rowe takes over #2 in the DII women's long jump at 20-6.25. And, Mikeala Hoelsken (photo, right, by Alan Versaw) of Adams State had a weight throw of 61-10.25 that stationed her at #2 among DII women.

A slow weekend for cross country/track and field for Colorado? Well, if this was a slow one, find yourself suitable cover when things heat up a little later in the winter. For now, though, there are some local athletes who have to feel very good about how this past weekend went.