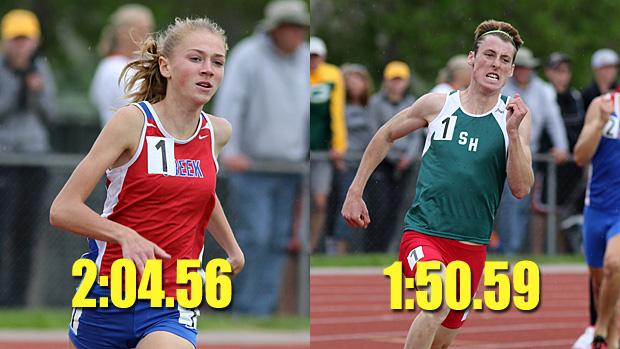 At the end of the day, Jordyn Colter and Blake Yount had Colorado's high school 800 meters records, but not the same ones they started the day with. Photos by Alan Versaw.

For a few minutes early in the afternoon, the rain thought about falling. Then it thought better of it; there was plenty enough falling on the track as it was.

It all started just a little before 12:30 PM when the gun went off on the 1A Girls 800. Ginger Hutton took precisely the opposite approach she took to Thursday's 3200 and charged directly for the lead. Once there (and it wasn't long), she kept charging. Hutton was on a mission.

And a 1A state record of 2:17-and-change went up in flames as Hutton broke through the imaginary plane at the finish in 2:12.81. To put some perspective on that, as recently as 10 years ago, the 3A Girls state record still hadn't broken through 2:15.

Hutton had a quiet little celebration of her own, got a nice round of applause from an appreciative crowd, and then made room on the track for the 1A boys.

This one had the appearance of a race for a bit longer than Hutton's effort--which looked a whole lot more like a solo time trial than a race.

Erick Enriquez-Acosta went to the front and started pounding. But, as hard as Enriquez-Acosta pounded, he--at least for a while--could not shake the pursuit of Shining Mountain's Jordan Cherin. Eventually, however, the gap between Enriquez-Acosta and Cherin did grow as the former's pace began to wither Cherin's will to dog his heels.

With two clocks staring him in the face as he crossed the finish line, Enriquez-Acosta was aware of his triumph over the old record even before it was announced to the crowd. At 1:57.86, Enriquez-Acosta shaved nearly three seconds off the existing record.

Next up,the 2A 800 meter records survived their round of assaults, but Jenna Anderson gave Jenni Celis' 2:11.43 record a sterner test than many would have dreamed possible only one year after it was set.

Ten minutes or so later, Katie Rainsberger was front running the 4A girls 800, leaving 17 girls flailing in the turbulence of her wake. With none of the same help she provided Elise Cranny when Cranny set the existing mark of 2:08.50 in 2013, Rainsberger rolled through the finish line in 2:08.87. Close, but no record. Rainsberger should get one more crack at the mark next year.

To say there was just a little bit of anticipation in the air when William Mayhew stepped to the line for the 4A Boys 800 meter race would be to indulge in a bit of understatement. Almost since the opening weekend of competition, Mayhew has been flirting with the state 800 meter record this spring, including setting the 4A all-time mark for 800 meters three weeks ago. Now, at last, he seemed to have the stage that might adequately support a full-blown assault on the state's all-time, all-classification record.

Mayhew wasted no time in getting to the chase. With Pueblo West's Zack Retzlaff struggling to hang on and perhaps providing just a bit of pacing help for Mayhew, Mayhew rolled through the first lap in about 54 seconds. The substantial percentage of the crowd who understood what the time meant and where the record stood held their breath.

Mayhew, on the other hand, was another kind of breathless. With no visible slackening of his pace and no help whatsoever from the field, Mayhew hit the second lap in just over 56 seconds.

The running clock on the race stopped at just over 1:51, but in an instant the official time flashed across the board. Mayhew's 1:50.79 had taken nearly half a second off the existing mark, set earlier this season by Smoky Hill's Blake Yount.

There was neither delay nor lack of enthusiasm in the crowd's response. Mayhew's run to a record was what they sat in their seats, and eventually rose to their feet, to see. And when it became apparent to all that the record had fallen, Mayhew's ear-to-ear smile was a well-earned triumph.

Mayhew had a few moments to savor his triumph as the 3A 800s took his place on the Jeffco Stadium track. A very solid 1:53.82 winning time by Dominic Carrese came short of the 3A Boys record, but helped keep a little buzz of electricity in the air. And that electricity was far more welcome than a lightning strike would have been at precisely that moment.

About 40 minutes after Ginger Hutton stepped onto the track, the 5A girls came to take their turn on the track. And the crowd wondered, almost audibly, "Can it happen again?"

Colter had already set the state all-classification earlier this spring with a 2:05.48. Nothing about Colter's season suggested she had peaked out. And, as it was with Mayhew's race, the state meet provided the ultimate stage for Colter's effort.

Though perhaps less emphatically than Hutton did, Colter asserted herself with an early commanding lead. It wasn't so much that Colter defied anyone to go with her, because that really wasn't even a question. As Hutton did with her race, Colter would be time trialing this effort.

The time trial clipped through the first lap with ease in about 62 seconds. Colter's strides chewed up meters on the track through the second lap. And, just as it did with Mayhew's race, the running clock on Colter's effort stopped at right around her existing record. But, we live in a day and age where technology answers questions with frightening speed.

Before anyone could blink, the official time of 2:04.56 flashed across the board. The unthinkable had happened. Those in attendance had watched two Colorado all-time, all-classification marks fall within a span of less than 15 minutes.

And all this time a young man wearing a green singlet and red shorts was taking everything in. Blake Yount, a senior at Smoky Hill headed to the University of Oklahoma, had just seen his own record vaporize in front of his very eyes, and he meant to take an honest shot at getting it back.

Like the day's record-setters before him, Young took a very stern pace off the start. Cherry Creek's Daniel Book went out on his heels and attempted to ride the wave.

But, adversity hit about half-way up the back straight. Fountain-Fort Carson's Benjamin Thomas, who had gone out faster still from a different super-alley, found himself squarely in the crosshairs of Yount's beeline to a record-setting effort. The pair got momentarily tangled on the back straight before Yount came clear and resumed his blistering pace.

The little jostling probably cost Young a fraction of a second on the first lap, a lap where he had "hoped to run a 53 or 54." As it was, Yount came through about about 54-mid, still a very strong pace but maybe just a hair behind schedule.

Yount, though, had read the Mayhew/Colter script and kept churning through the second lap. His would end up as the fastest second lap of the day, bringing him through the finish line in 1:50.59 and earning back the state record that had gone AWOL for a span of 20 minutes.

This time, after the obligatory and well-earned standing ovation, the crowd went quiet. People meeting each other along the walkways around the stadium simply looked at each other and shook heads in disbelief. There was nothing words could add to the experience they had all witnessed.

It was the hour that records fell like rain, and perhaps even in place of rain.

Click next to enjoy a photo gallery of our 800-meter record-setters: