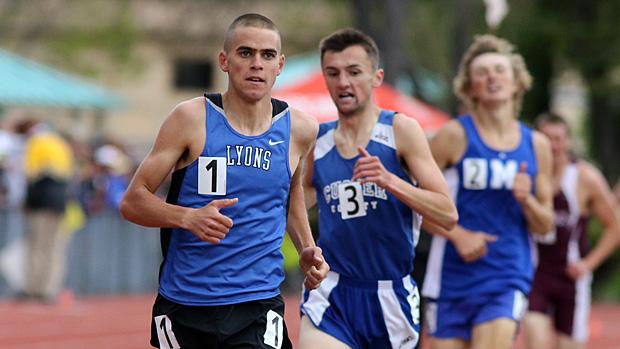 It took Paul Roberts a while to drop the stubborn resistance from Corey Lewenkamp, but once he did he very nearly chased down the 2A state meet record for the 1600. Photo by Alan Versaw.

Welcome to the state track meet where, in almost any given year, the team title winners have to find ways to overcome some best-laid plans that went awry.

This year, the champions of finding ways to scramble their way past some fumbled opportunities was Lyons High School. Why undoubtedly partly as an effort to conserve strength, Lyons' placing in preliminary heats cast something of a dark cloud over the team's Thursday and early Friday proceedings. And, Lyons dropped three points behind their seeds when Joel Such finished fifth in Thursday's 3200 when Corey Lewenkamp and Andy O'Dell blew the doors off their seed marks and finished ahead of Such.

Paul Roberts did conquer Mt. 3200 and Mt. 1600, just missing the 2A state meet record in the latter and dispatching threats from Lewenkamp in both, but was a somewhat surprising fourth in the 800, two places below his seed. In a tight team race, you begin to think about things like that.

By the end of the day on Thursday, the Lyons ship appeared to be taking on water. And the only reassuring thing about that was that Cedaredge and Resurrection Christian were having some of the same kind of problems. The brightest point of light on Thursday for Lyons was a second-place finish in the pole vault for Owen George. That one exceeded a few expectations.

But the overall story took a very different twist when starting with the 4x200 finals on Friday afternoon. With Resurrection Christian eliminated from the event due to a preliminary round DQ, Cedaredge took a fairly easy win, but Lyons moved up smartly from 6th in prelims to 3rd in finals and improving by one place on their original seed in the event.

By Saturday, Lyons could do nearly no wrong.

Zach Christiansen got the day going with a third in the 110 hurdles. Several minutes later, Tullef Rudlong stung an unsuspecting 100 meter field with an 11.50 (-2.6) winner after missing winning his heat in prelims. Christiansen and Rudlong would be back later in the day with a second in the 300 hurdles and a fourth in the 200. Owen George climbed roughly ten places above his seed to take fifth in the long jump at 20-1. Sandwiched in the middle of the day was the 4:21.78 winner by Paul Roberts in the 1600. Joel Such and Matt Dillon added a fourth and a seventh in the 1600, stealing a point versus seeds in the process.

By the time the concluding pair of relays rolled around at the end of the day, Lyons had locked up a state title. Even a second in the 4x100 and a first in the 4x400 for Cedaredge could not bring the Bruins any closer than 11.5 points to Lyons.

While Cedaredge battled to the bitter end, too many entries in prelims never found their way into finals to keep pace with Lyons.

Shane Gates scored a second in the 110s and a first in the 300s to pace the Cedaredge effort. But the combined total of 23 points from the sprint events from Isaac Swoffer, Bryce Klaseen, and Jacob Robb came up a bit shy of what Cedaredge required to stay on pace. Austin Williams produced 15 points in the two throwing events, but that, too, was just a shade behind schedule. Gates and Isaac Swoffer managed but a single point between them in the long jump. Stirring outright wins in the 4x200 and 4x400 (photo, below, by Alan Versaw) could not overcome all of that. 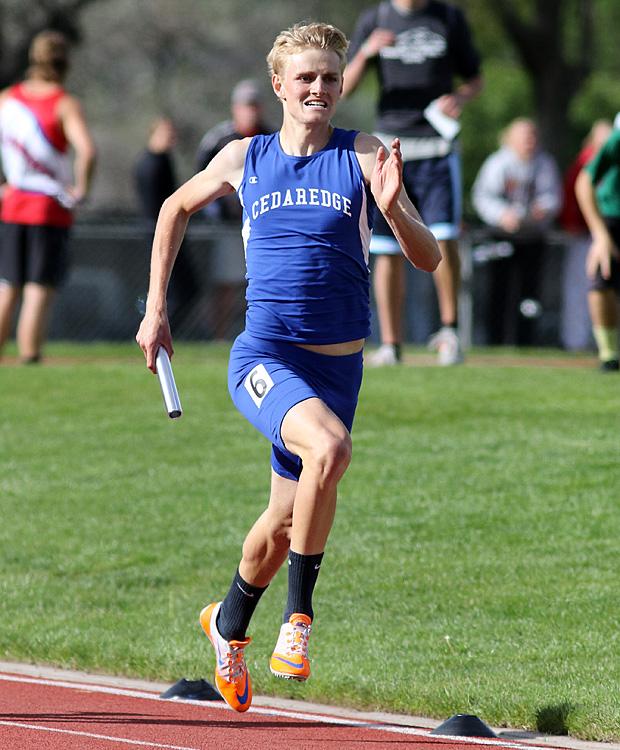 Resurrection Christian got all they could have imagined, and perhaps a bit more, from sprinters Cooper Ward and Dakota Murrow and middle distance ace Evan Anderson, but scoring support from events not falling between 100 and 800 meters was non-existent.

Although falling well outside the circle of crucial to the team-scoring race, nice performances were turned in by Vail Christian's Cooper Daniels in winning the pole vault at 14-0, Garrett Quintana winning the discus at 164-9, Burlington's Tyler Boyd stunning the shot put field with a 51-7.75, John Broadhead winning the long jump at 22-1.25, Ty Zupancic topping out the high jump field at 6-5, Jorden Jole conquering the 800 in 1:58.64, and Ivan Mendoza winning the 110 hurdles at 15.19 after a major scare in prelims that found him at the back of his heat half-way through the flight of hurdles.