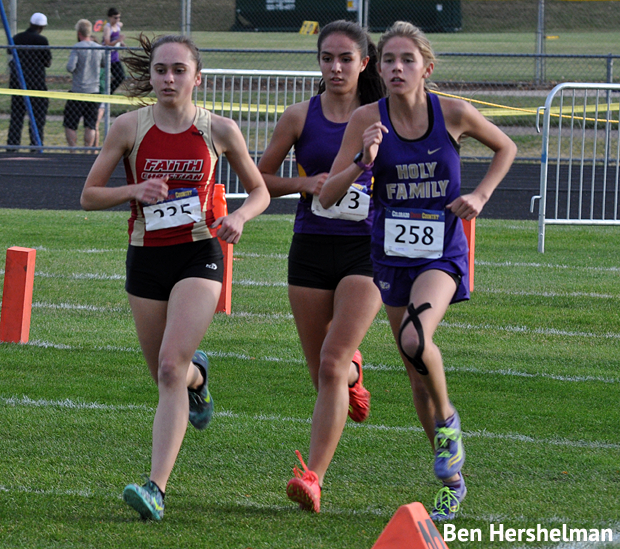 As the gun went off for the girls race at 5:00, the sun was noticeably lower in the sky, and the air had turned just a slight bit chillier. A few passers by swore that all the running was causing the leaves to fall off of the trees even faster, but that will have to be left as hearsay.

All season, the Peak to Peak girls have looked near impossible to defeat, and they did nothing to upend that mystique on Friday. Quinn McConnell, Anna Shults, and Tiana Bradfield cruised around the course in 1st, 2nd, and 3rd. McConnell blitzed the course, but was still about ten seconds off of Allie Chipman's course record from the 2015 St. Vrain Invitational. Allison Beasley was 7th and Elle Triem was 15th. 28 points for the Pumas, and good night to any other team hoping for the regional trophy.

Holy Family and Denver North did a nice job of battling it out for the scraps that the Pumas left behind. The Tigers rode Alyssa Wells, Taylor Santangelo, and Isabelle Hren's top ten finishes to a second place finish with 54 points. Denver North was not far off. Laura Romero finished 5th and led the girls to a 63 point 3rd place finish.

Battling it out behind for the final state qualifying spot, the girls from Faith Christian charged out to an early lead over Jefferson Academy and held on as the Jaguars tried to rally on the final lap. Shannon King finished 6th to kick off the scoring and led the Eagles back to the state meet for the first time since 2010.

Individually, Addie Horton from DSST: Stapleton is headed to Colorado Springs. So is Bridget Turner from The Academy.