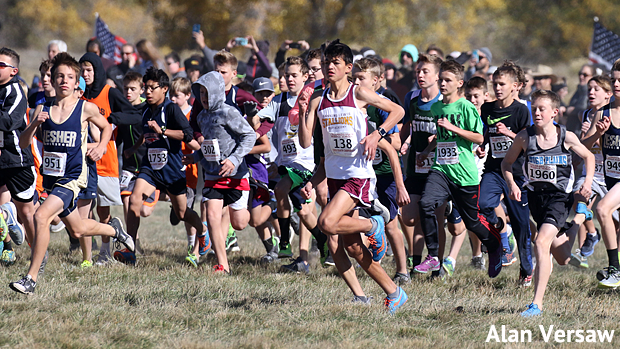 Erik Le Roux wasted no time surging to the front of the boys championship race. After that, the battle was for second place.

Extra layers and windburn were the orders of the day. It's a good thing the middle school uniforms are generally a couple sizes too large. Otherwise, I don't know how they would have successfully crammed all those layers between their uniforms and their skin. And, I have a ridiculous number of photos of runners leaning into a crosswind. Otherwise, though, the weather was great.

We're now seven years into the experience known as the Colorado Middle School State Cross Country Championships. And, this has become--and remains--a big time event. 3500 meters of mayhem on a tight course, crammed with spectators on either side through about half of the entire length of the race.