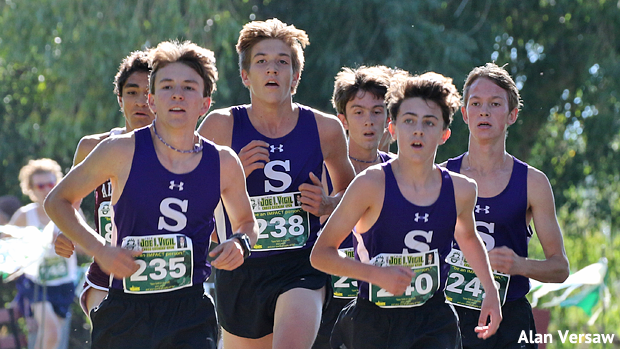 The Spartans, they run in a pack. And a lot of raw meat got chewed up along the way, with carcasses spit out the back.

Two years ago, Adams State University moved the Joe Vigil Invitational into a weekend where the meet would have to compete directly against Liberty Bell and St. Vrain.

You would think that would sound the death knell of the meet, at least as a high school meet. I, for one, was skeptical of the wisdom of that move. The reality two years later, however, is that this meet has become wildly successful--probably beyond anyone's dreams, either at Adams State or at Alamosa High School.

The high school course has enjoyed a reputation for being insanely fast, especially when you factor in the 7554 feet of elevation. It turns out there was a reason for those insanely fast times. A fix was implemented this year by adding about 150 meters to the course to bring it to a full 5K.

It's still relatively fast for the elevation, but not incomprehensibly fast. My suspicion is that the teams will keep coming back--a full 5K ultimately counts for more by most cross country folks than a screaming fast, but ultimately bogus, time does.

This morning's conditions were nice, but not sensational. By Alamosa standards, it was an unseasonably warm September morning, with temperatures well into the 50s for the boys race and easily into the 60s by the time the girls ran. Oxygen density was middling, but dropping through the morning.

With that as backdrop, click through the rest of the article for summaries of the boys (first) and girls (second) races. The ordering here merely reflects the order in which the races were run.