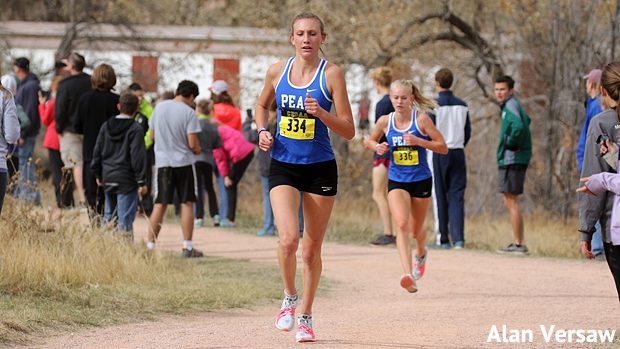 It's been a while since we've seen Peak to Peak in blue singlets, but the remainder of the scene is familiar to the rest of 3A.

I'll go a short distance out on a sturdy limb here and speculate that the name "Peak to Peak" is at least an allusion to the Indian Peaks that dominate the westward horizon at Peak to Peak Charter School. And, of course, "peak" has a double meaning, suggesting elevation of performance as well as loftiness of altitude. And so, there are plenty of peaks in the Peak to Peak saga.

We can now list Saturday as yet another peak in the weighty Peak to Peak cross country tome.

Things were made a bit more difficult with the absence of Jenna Howard. Howard had been a reliable member of the P2P scoring five all season long. Nevertheless, Peak to Peak's status of team favorite seemed to have enough stability to withstand that particular blast.

It didn't take long, however, for a picture to emerge of a very determined Steamboat Springs team looking to pull off the upset of the decade in 3A Girls. The Sailors got out hard and held an impressive lead in the team scoring at one mile. That lead, though much diminished, remained in place even at two miles.

But the Peak to Peak machine was not to be denied. Steamboat Springs had spent hard early, and the effort was starting to tell some in their places. Meanwhile, the patience of Peak to Peak was showing up in a diminishing team score tally over the course of the race, though there was little that could be done to diminish the 1-2-3 of Quinn McConnell, Anna Shults, and Tiana Bradfield.

At 5000 meters, Peak to Peak--with 21 points from Allison Beasley and 55 from Elle Triem--had 82 points. Steamboat Springs had floated their total to 101. Maggi Congdon hung tough in fourth, but the intense early pace for Steamboat proved too difficult to sustain through the whole of the scoring entire order.

The Classical Academy, with a strong second half of the race, dropped their team total to 120 to claim third.

Individually, there was little mystery to the race. Precisely as expected, McConnell and Shults wasted little time breaking from the field. For the rest of the race, there was McConnell, a gap, Shults, a gap, and then the field.

There was more mystery in Peak to Peak shedding their warm-ups to reveal royal blue singlets than there was in any of the top three finishes.

Matters took on an element of heightened interest--at least for a while--starting at third place.

A bit contrary to custom, Bradfield did not break early with McConnell and Shults. Instead, she hung back with a pursuit group that included Congdon, Hannah McReavy, Hannah Ellis, Alyssa Wells, Rachel Ingram, and, in early stages of the race, a few more.

Shortly after the mile, however, Bradfield made her break from that group and was not seen again until the finish line. Ellis would complete the top five, meaning there would be no real surprises among the top five finishers.

Reality made no serious departures from expectations in the 3A Girls race. Both in the individual tally and in the team tally, folks around the state had this one mostly figured out a while ago. Stiffer challenges await Peak to Peak--and hopefully they have their full roster back intact for that.